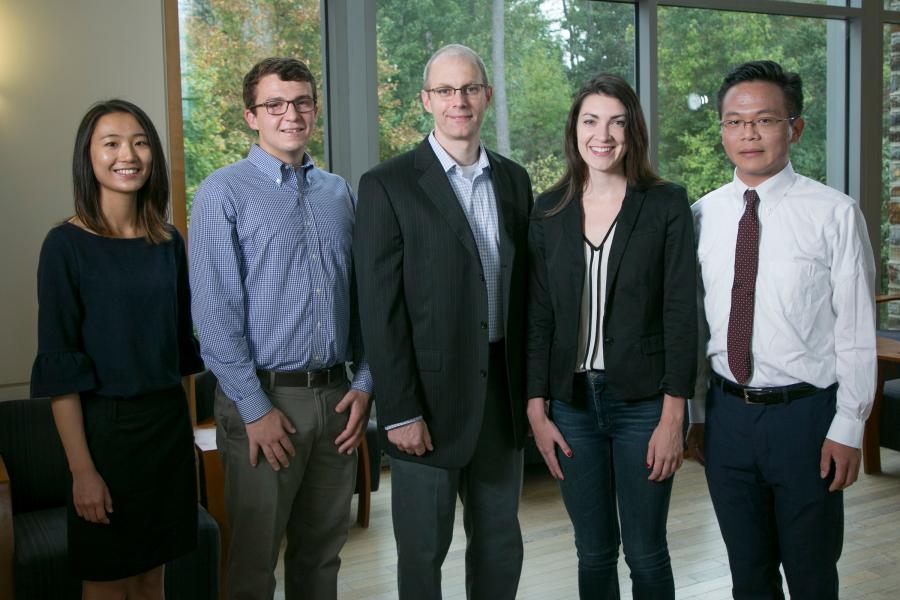 Kristen Hagan (Chambers Fellow) is a Ph.D. student in Duke University's Biomedical Engineering Department under the advisorship of Dr. Joseph Izatt. In 2017, I graduated summa cum laude from The University of Texas at Austin with a BS in Biomedical Engineering. During my undergraduate career, I worked in Dr. Andrew Dunn’s Functional Optical Imaging Lab, investigating the use of two-photon microscopy for deep-tissue brain imaging. At Duke, I have begun work on a handheld laser scanning ophthalmoscope project, capable of imaging human cone photoreceptors in vivo. In the future, I hope to use an adaptive optics OCT (AO-OCT) system to increase the lateral resolution of retinal images and help correct for patient-specific aberrations caused by the manipulation of the light’s wavefront when propagating through the eye. I am a recipient of the James B. Duke Fellowship, the University Scholars Fellowship, and the National Science Foundation Graduate Research Fellowship.

Yuqi Tang (Chambers Fellow) is a first year Ph.D. student in the Department of Biomedical Engineering. Yuqi graduated from Rice University in 2017 with a B.S. in Bioengineering and a minor in Computational and Applied Mathematics. As an undergraduate, she worked under the guidance of Professor Rebekah Drezek on developing an automatic low-cost alternative to flow cytometry using fluorescent microscopy. Additionally, she engaged in research with Professor Richard Bouchard in optimizing algorithms for photoacoustic signal analysis and blood oxygenation estimation. In the summer of 2016, Yuqi participated in the Research Internships in Science and Engineering at University of Erlangen-Nuremberg, Germany. There she conducted research on creating a non-contact photoacoustic endoscopy using speckle pattern analysis. At Duke, Yuqi is working with Professor Junjie Yao, who focuses on translating photoacoustic imaging advances into theranostic applications.

George Bullard (Chambers Scholar) is currently a fourth year PhD student in the department of Chemistry.  He graduated from the University of North Carolina at Greensboro in 2014 with a BS in Chemistry.  As an undergraduate, he worked with Kimberly Petersen on the design of asymmetric catalysts for small molecule transformations.  At Duke, under the guidance of Professor Michael Therien, his research is currently focused on developing polymer-wrapped carbon nanotube superstructures and understanding their unique photophysical properites.  His primary aim is to elucidate the molecular-level principles by which these complex chemical systems carry out photochemical charge separation, transport, and storage.  This will impact the design of practical solar energy conversion and storage devices.

Qiwei Zhan (Chambers Scholar) is currently a PhD student under the supervision of Professor Qing Huo Liu in the Department of Electrical and Computer Engineering. He received the B.S. degree in geophysics from the University of Science and Technology of China, Hefei, China, in 2013, and the M.S. degree in civil and environmental engineering from Duke University in 2016.   His current research involves the development of advanced numerical methods for wave propagation problems.  The aims of his algorithms are 1) the scalability in the increasingly powerful supercomputer architectures, 2) the adaptivity in the intricately multi-scale engineering problems, 3) the efﬁciency in the extremely large-scale wave simulations, and 4) the accuracy in the dynamically multi-physics coupling interfaces.  Based on the unified mathematical analysis, Qiwei Zhan develops an integrated multi-scale and multi-physics 3D transient simulator. This simulator is based on the discontinuous Galerkin pseudospectral time-domain method with adaptive nonconformal meshes, which is compatible with various applications, ranging from conventional tough problems: arbitrary anisotropic elastic/electromagnetic media, viscoelastic media, poroelastic media, fluid-solid coupling to modern challenging topics: such as fracture-wave interaction. Furthermore, some important theoretical improvements are proposed. Especially, in the unified framework, he succicently derived the Riemann solvers with explicit physical insight, which are the key to guaranteeing the stability and accuracy of the discontinuous Galerkin methods and domain decomposition methods.

Andrew Boyce (Fitzpatrick Scholar) Andrew Boyce is a second year Ph.D. student under the guidance of Prof. Maiken Mikkelsen in the Department of Electrical and Computer Engineering. Andrew graduated magna cum laude from Boston College with a B.S. in Physics and a minor in Mathematics. As an undergraduate, researched terahertz imaging systems in Prof. Willie Padilla’s group and later completed a senior honors thesis in Prof. Michael Naughton’s group on point-of-care use of a nano-coax-based cholera detector. He also participated in an REU program at the University of Rochester in Prof. Todd Krauss’s group, where he studied the fluorescent properties of single-walled carbon nanotubes. Andrew’s current research in the Mikkelsen Lab is focused on tailoring the optical properties of a novel plasmonic nanostructure, including actively tuning the absorption resonance, enhancing single-photon emission from color centers in diamond and enabling polarization-sensitive, dual-band absorption. Andrew is also the recipient of a Gabelli Presidential Scholarship at Boston College.